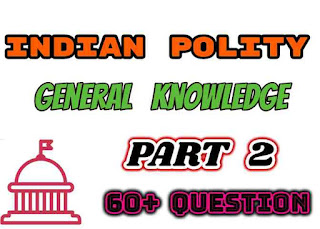 1. Which act made the Indian Legislature bicameral? Government of India Act, 1919
2. What is the duration of proclamation of Financial Emergency? At the first instance 2 months
3. During the proclamation of National Emergency which articls can not be
suspended? Articles 20 and 21
4. Where can the report of the UPSC discussed? In Parliament before
being accepted
5. To whom is the resignation letter of a State Public Service Commission member
addressed? Governor
6. What does the special status of Jammu and Kashmir imply? A separate Constitution
7. To whom is the Chief Minister of a State responsible? Governor
8. What is the source of maximum income to Panchayati Raj? Government grants
9. Which is at the apex of the-three tier system of Panchayati Raj? Zila Parishad
10. Which can impose reasonable restrictions on the Fundamental Rights of the
Indian citizens? Parliament
11. The Fundamental Right to Property has been deleted by the which Amendment
Act? 44th
12. Which were the patrons of Sangam, an assembly of Tamil poets? Pandya
13. To whom the Vice-President’s letter of resignation is to be addressed? President
14. On which basis Montague-Chelmsford Report formed? The Government of India Act, 1919
15. Who has the authority to remove the Vice-President from his office before the
expiry of his term? Parliament
16. When was Inter-Governmental Authori on Development come into existence? 21st March, 1996
17. How can a major portion of the Constitution be amended? By two-thirds majority
18. When was Lake Chad Basin Commission founded? 22nd May, 1964
19. Which Constitutional Amendments banned the floor crossing in Parliament? 52nd
20. When is the Constitution of India designed to work as a unitary government? In times of Emergency
21. From which of the country, Constitution of India has adopted fundamental duties? Erstwhile USSR
22. Who was the member of the Rajya Sabha when first appointed as the Prime
Minister of India? Indira Gandhi
23. Who is the ex-officio Chairman of Rajya Sabha? Vice-President
24. Among the Union Territories of India, which one has the largest size? Pondicherry
25. Under which act was the Supreme Court set up? Regulating Act
26. Which Judge of the Supreme Court was unsuccessfully sought to be impeached? Justice Ramaswami
27. Which Governor of Bengal committed suicide in 1774? Robert Clive
28. Bouncing of cheques has become an offence. What is the punishment for the same? 6 months imprisonment
29. By whom is Recognition to a political party accorded? By the Election Commission
30. From which date shall the tenure of every Panchayat be for five years? From the date of its first
meeting
31. Which is not the concern of the local government? Public Utility Services
32. In which year was the Constituent Assembly which framed the Constitution for
Independent India set up? 1946
33. What are the total members of Security Council– 15
34. Who presided over the inaugural meeting of the Constituent Assembly of
India? Sachidananda Sinha
35. Between which a government is federal or unitary on the basis of relations? Centre and States
36. Who was appointed by Ashoka to administer justice in his empire? Rajuka
37. Who was the first Deputy Chairman of Planning Commission of India? Shri V. T. Krishnamachari
38. The Ninth Schedule was added by which Amendment? First
39. To which duties is the system of value added taxation applicable? Excise duties
40. By whom is the Speaker of the Lok Sabha is elected? All the members of Lok Sabha
41. Which first woman to become a Chief Minister of any State in India? Sucheta Kripalani
42. What does the special status of Jammu and Kashmir imply? A separate Constitution
43. To whom is the Chief Minister of a State responsible? Governor
44. Which tax is levied by the Union and collected and appropriated by the States? Stamp Duties
45. With which amendment act has Panchayati Raj received constitutional status? 73rd
46. By whom was the Constitution of India adopted? Constituent Assembly
47. When was the Constituent Assembly for undivided India first met? 9th December, 1946
48. The United Nations declared 4th week of September which week? Peace Week
49. Which right conferred by the Constitution of India is also available to noncitizens? Freedom to speech
50. Which is a human right as well as a fundamental right under the Constitution
of India? Right to Education
51. After howmany years One-third of the members of the Rajya Sabha retire? Second year
52. A Money Bill passed by the Lok Sabha has to be passed/returned by Rajya
Sabha within howmany days? 14 days
53. How can a Change in distribution of powers between the Centre and the States be done?
Amending the Constitution
54. By which bill does the government make arrangement for the collection of
revenues for a year? Finance Bill
55. The distribution of power between Centre and the States is based on which
scheme? Government of India Act, 1935
56. Which helped to develop close ties between the government and the masses? Ryotwari Settlement
57. Which Amendment provided for an authoritative version of the Constitution in
Hindi? 58th
58. After howmany years is the President of USA is elected? 4 years
59. Economic Planning is a subject of which list? Union List
60. Which Act gave representation to Indians for the first time in the Legislature? Government of India Act, 1935