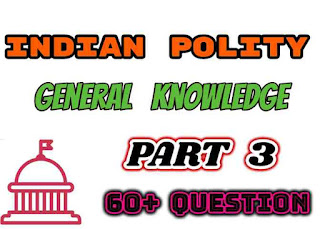 1. Who has the power to form a new State within the Union of India? President
2. By which act did the Crown take the Government of India into its own hands? Government of India Act, 1858
3. Which was the crop during the 13th and 14th Centuries A.D. the Indian peasants
did not cultivate? Maize
4. In whom the executive authority of the Union is vested by the Constitution? President
5. By whom is the Chairman of the Public Accounts Committee of the Parliament
appointed? Speaker of Lok Sabha
6. Who decides whether a particular bill is a Money Bill or not? Speaker of Lok Sabha
7. Who used the phrase ‘Un-British’ to criticize the English colonial control of
India? Dadabhai Naoroji
8. Where is In the Constitution of India, the word ‘Federal’ used? Nowhere
9. By whom is Recognition to a political party accorded? By the Election Commission
10. Which Amendment provided for an authoritative version of the Constitution in
Hindi? 58th
11. Under whose signature are the members of All-India Services appointed? President
12. Which part of the Constitution reflects the mind and ideals of the framers? Preamble
13. What does the Preamble of our Constitution contains? The spirit of the Constitution
14. Which State has the largest percentage of reserved parliamentary seats? Uttar Pradesh
15. According to which system are the members of the Rajya Sabha elected? Single Transferable
Vote System
16. The members of the State Legislative Assembly are elected for the periods of– 5 years
17. Which One feature is distinguishing the Rajya Sabha from the vidhan Parishad? Indirect election
18. What is the electorate for a Panchayat? The Gram Sabha
19. For how long does Mayor of a Municipal Corporation hold the office? 1 year
20. Who was the President of the Constituent Assembly? Dr. Rajendra Prasad
21. Who were considered constitutionalist within the Indian National Congress? Satyamurty and K. M. Munshi
22. Which is a human right as well as a fundamental right under the Constitution
of India? Right to Education
23. Who was instrumental in bringing the Extremists and the Moderates together at
Lucknow? Annie Besant
24. Howmany times has National Emergency been declared? Three times
25. Who headed the Cabinet Mission? Lord Pethick Lawrence
26. Under which act was the Supreme Court set up? Regulating Act
27. Which Judge of the Supreme Court was unsuccessfully sought to be impeached? Justice Ramaswami
28. By whom is the Area of Lok Sabha Constituency for the purpose of general
election determined? Election Commission
29. After howmany years is Election of Rajya Sabha held? 2 years
30. On which Panchayat did the Ashok Mehta Committee greater emphasis? Mandai Panchayat
31. Who decides about the reasonableness of the restrictions placed on Fundamental
Rights? Courts
32. By whom is the Separation of the Judiciary from the Executive enjoined? Directive Principle
33. To which Bill the President must accord his sanction without sending it back for
fresh consideration? Finance Bills
34. Which was the first woman film star nominated/ elected to the Rajya Sabha? Nargis Dutt
35. Whose prior consent can the Money Bills be introduced in the State
Legislature? Governor
36. Who was the chairman of National Income Committee? P. C. Mahalanobis
37. Which State has no Panchayati Raj Institution at all? Nagaland
38. Who is the executive head of a Municipal Corporation? Commissioner
39. How did Constituent Assembly arrived at decisions on the various provisions of
the Constitution? By consensus
40. Which body finalises the Five Year Plan proposals? National Development Council
41. Which has the most profound influence on the drafting of the Indian Constitution?
Government of India Act, 1935
42. Among which class did Indian National Congress find wide acceptance initially? Educated middle class
43. The five year term of the President is calculated from which day? The day he assumes charge
44. If the President wants to resign from office, he may do so by writing to whom? Vice-President
45. Mahatma Gandhi gave the call ‘Do or Die’ during which movement? Quit India Movement
46. How many times was the term of the Lok Sabha extended upto 6 years? Once
47. In which of the Parliamentary Financial Committees is the Rajya Sabha not
represented? Estimates Committee
48. The States Reorganisation Act created howmany States and Union Territories? 14 and 6
49. Which is not administered by a Lieutenant Governor? Chandigarh
50. Which was the chariler Act to close the trade of East India? 1833
51. By whom is the Speaker of the Lok Sabha is elected? All the members of Lok Sabha
52. By whom is the Chairman of Public Accounts Committee appointed? Speaker
53. Which was the first State to become bifurcated after independence? Madras
54. On which date was the State of Bombay was bifurcated into Maharashtra and
Gujarat? May 1, in the year 1960
55. Which post is not mentioned in the Constitution of India? The Deputy Prime Minister
56. How can a major portion of the Constitution be amended? By two-thirds majority
57. How the Constitution describes India? As a Union of States
58. Which language is not recognised in the 8th Schedule though it is an official
language of a State? English
59. Who has the final power to maintain order within the House of People? Speaker
60. Who fixes the salaries and the allowances of the Speaker of Lok Sabha? Parliament
FOLLOW ON instagram =  লিংক
FOLLOW ON twitter  =       লিংক
FOLLOW ON Facebook like page =  লিংক
FOLLOW ON Google plus=  লিংক
FOLLOW ON Youtube channel = লিংক
WEBSITE LINK -  লিংক
PLASE SUBSCRIBE MY YOUTUBE CHANNEL   লিংক