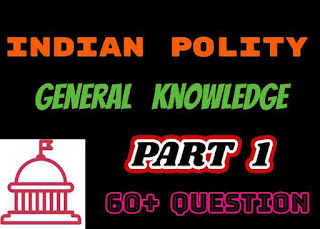 1. Where was the first session of the Constituent Assembly held? New Delhi
2. Who was the Chairman’ of the Union Constitution Committee of the Constituent
Assembly? Jawaharlal Nehru
3. Which proclamation of National Emergency automatically suspends? Right to freedom
4. On the basis of financial crisis howmany times has emergency been declared by
the President of India? Not even once
5. What type of Party system has been envolved in India? Multi-Party
6. Which post does the Constitution of India does not mention? The Deputy Prime Minister
7. Who decides the number of Judges in a High Court? President
8. With which does the power to extend or restrict the jurisdiction of the High
Court rest? With the Parliament
9. Who appoints the Chief Election Commissioner of India? President
10. Who said “I therefore want freedom immediately, this very night, before dawn
if it can be had”? Mahatma Gandhi
11. Up to howmuch age can the Members of the Union Public Service Commission
function? 65 years
12. Which country has the briefest Constitution in the world? USA
13. Who was made the Home Minister when Jawaharlal Nehru formed the Interim
Government in 1946? Sardar Patel
14. Which committee was assigned to recommend reforms in the insurance sector? Malhotra Committee
15. What is the minimum permissible age for employment in any factory or mine? 14 years
16. Who is competent to prescribe conditions as for acquiring Indian citizenship? Parliament
17. When the Vice-President acts as President he gets the emoluments of which post? President
18. The resolution for removing the Vice-President of India can be moved in which
sabha? Rajya Sabha alone
19. To whom does the Public Accounts Committee submit its report? The Speaker of the Lok Sabha
20. Which is the highest and final judicial tribunal in respect of the Constitution of India?                 Supreme Court
21. Which Union Territory attained statehood in February, 1987? Goa
22. Which Article of the Constitution of India makes a specific mention of Village
Panchayats? Article 40
23. Which Amendment of the Constitution of India deals with the issue of
strengthening of the Panchayati Raj? 73rd
24. What does the Preamble of our Constitution contin? The spirit of the Constitution
25. The source of India’s sovereignty lies in which thing? Preamble to the Constitution
26. When the Vice-President acts as President he gets the emoluments of which post? President
27. In India, the concept of single citizenship is adopted from which country? England
28. In which year was the first no confidence motion moved in the Lok Sabha after
independence? 1963
29. From where can a Member of Parliament claim immunity? From civil cases only
30. With which the executive power relating to concurrent subjects remain? The Centre
31. Howmany subjects are in the Union list? 97 subjects
32. By which committee was Mandai Panchayats recommended? Ashok Mehta Committee
33. Why was the Panchayati Raj System adopted? Decentralise the power
of democracy
34. Which Committee was formed to suggest means for eradicating black money? Cheiliah Committee
35. Who was the President of the Constituent Assembly? Dr. Rajendra Prasad
36. Which Directive Principle of State Policy has NOT been implemented so far? Uniform civil code for the citizens
37. Which amendments accorded precedence to Directive Principle over
Fundamental Rights? 42nd Amendment
38. In an atom the order of filling up of the orbitals is governed by which principle? Aufbau principle
39. Which agency has the power to declare any industrial unit as a potentially sick unit? BIFR
10. Who is authorised to decide over a dispute regarding disqualification of a
member of Parliament?
President
41. The Lok Sabha is called in session for at least how many times in a year’? Thrice
42. When can the salaries of High Court judges be reduced? During a Financial
Emergency (Art. 360)
43. By whom are the Chief Justice and other Judges of the High Court are
appointed? President
44. Who was the first speaker of the Lok Sabha? Malgaonkar
45. Which is the State having the largest population of scheduled castes? Utter Pradesh
46. Which country has the briefest Constitution in the world? USA
47. In which state has India’s largest private sector sea port been commissioned
recently? Andhra Pradesh
48. Who was the Chairman of the Drafting Committee of the Indian Constitution? B. R. Ambedkar
49. How long did the Constituent Assembly take to finally pass the Constitution? About 3 years since Dec 9, 1946
50. How type of right is Right to Information? Fundamental right
51. Meghnad Saha is known for his contribution in which field? Physics
52. Which right conferred by the Constitution of India is also available to noncitizens?
Freedom to speech
53. What is the minimum age for election/appointment as member of the Rajya Sabha? 30 years
54. What is the minimum age for being the member of the Parliament? 25 years
55. What is the maximum number of elected members in a State Assembly? 500
56. By whom are Zonal Council provided? By Parliamentary Act
57. By whom was an inter-State Council set up in 1990 under Article 263 of the
Constitution? President
58. How many votes are entitled for members of the UN Economic and Social Council? One vote
59. On which date India became a Sovereign, democratic republic? 26-Jan-50
60. What is the present strength of members in the Economic and Social Council of
the UN body? 54